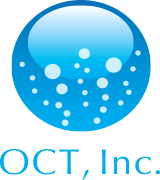 OCT, Inc. has been contributing to the society in the fields of
"Hydrogen energy", "Environment", "Beauty" & "Health"
through its work of Hydrogen.